What kind of a wacko goes out and races six days after the Boston Marathon? Apparently quite a few kinds, since a bunch of us lined up for a little post-Boston reunion on the starting line of the Groton Road Race 10K a week ago, a mere six days after punishing ourselves through the Newton hills and down Beacon Street.

Groton is one of those classic New England races that has transcended mere racedom to enter the zone of eventdom. It is known to and appeals to the entire community, not just the hard-core and light-duty runners. This is evident by the size of the crowd compared to the size of Groton. There simply can’t be that many runners in a town that size, even counting us foreigners imported from neighboring villes. Truth be told, I didn’t go to Groton because I wanted to race. I went to Groton because I wanted to go to Groton, because my friend Chris is the race director, and I wanted to see his big party. I wasn’t disappointed. Quite the party. 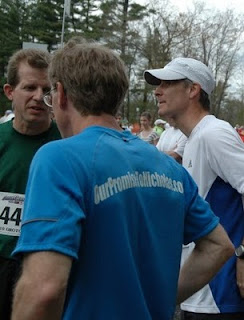 Groton is a whole host of events ranging from a couple of kids’ runs to a 5K and then the headliner event, the 10K. The races are big enough to warrant shutting the streets, and the town is small enough that when the streets are shut, you can’t go anywhere, which led to the ironic situation of having to sit in traffic due to a race while trying to get to a race. The old guy who got out of his car behind me and groused about, “Can’t believe they’re running a race on a major thoroughfare!” just didn’t get it. In Groton, there simply aren’t many thoroughfares, period. You can’t avoid it. Fortunately, he avoided me, as I would have had a bit of a debate with his stance.

Our Masochism Trio of Boston Recoverees including myself, Rocket John, and Boston PR Mark, assembled at the start which was curiously marked as if to expect about a hundred five-and-a-half minute pace runners and at least a hundred more at six minute pace. Knowing that was probably more than a bit hopeful (the actual count at day’s end was three under 5:30 and five more under 6:00), we all paced around up front while awaiting a ten-minute delay due to a car wreck 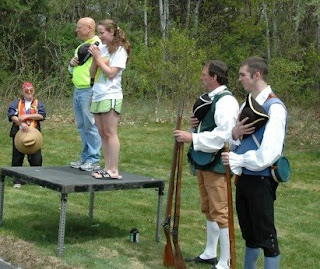 (no runners, thankfully) on the course. A couple of colonial minutemen fired off a volley, fortunately missing everyone, and we were off on a day that turned curiously from expected cool showers to surprisingly humid warmth.

The foolishness of this endeavor sunk in before we even left the high school track. Racing six days after Boston? Yeah, right.

Rocket John didn’t seem to notice this irony, bolting out in a manner suitable to his nickname. By the mile he was a good thirty seconds up on me, and that with me hitting the mile slightly under six flat. What did he put in his Wheaties this morning?

Mile one and I was pretty much finished for the day. No surprise, that was all the legs would offer up, no more power to expend. That’s not to say I was flat on the

ground or anything, just that there was no way I’d be racing toward the six-oh-somethings I’d like to see in a five to six mile race. John was long gone, and by one and a quarter, Boston PR Mark eclipsed me as well. I told him I was toasted, put a fork in me, I was done, but soldiered on, settled down to a “default race pace” in the 6:20’s and chugged it out.

If there was any consolation, it wasn’t as if I was losing ground wholesale. I sparred with a few runners, trading a few places back and forth, having enough oomph to take a few on the upgrades – the benefit of growing up around and living on hills. There was the pleasant surprise of an unexpected cheering section, a co-worker out to root on his son, who spotted me around mile five. But it was otherwise an unremarkable run. I was happy to be able to hold my pace once I’d settled in, to post a little kick at the end just for the cameras, and mostly to be finished. 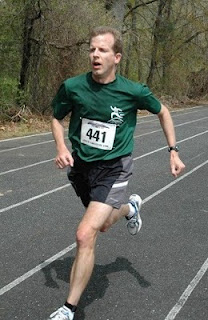 PR Mark, Rocket John, and I took 8th, 13th, and 15th among the nearly 500 finishers, nothing to scoff at, but nothing special on my part. Ironically, though I hadn’t gotten a real 10K split in the Tri-Valley 15K a week before Boston, when I extrapolated my 10K from miles one through six and an appropriate part of seven, it turned out – I can’t make this up – to the second identical to Groton. Of course, one would hope the 10K to be faster than the 15K, but of course, one doesn’t really care six days after Boston. In fact, one could be quite pleased to hold the same pace.

Now, the funny thing is that in five years of Second Lap running and racing, eleven marathons, countless 5Ks, bazillions of distances in-between, I’d never actually run a 10K. So what the heck, it was a PR anyway.

And the post-race munchies were great, too. Hats off to you, Chris, you ran a fine event.

Bizarre Note: Groton is a classy New England town, home to a classy New England prep school, not surprisingly called the Groton School. But back in those First Lap days in upstate New York, we knew nothing of this. We knew of Groton as a small town in the Middle of Nowhere (as if we lived in the Center of Somewhere?), between Ithaca and Cortland, and worthy of derision as only high-schoolers can generate. For some reason one of the guys on my cross country team decided that the name “Groton” sounded like a fungal disease, and in that weird flavor of high school humor, we’d lament the pour soul who came down with a bad case of Groton. It’s thirty years later and I can’t get that out of my head, but I’m pleased that I haven’t needed any anti-fungal creams since running that fine event in that fine town last weekend.
Posted by Gary Cattarin at 11:34 PM