Skimming this month’s Running Times (I find these magazines become repetitive after about two years, so a skim usually suffices), I did note an interesting bit on connective tissue, the bane of my existence as age accumulates. On the famed Achilles, said article referenced a study once done where subjects who had lived through the era of atmospheric atomic tests – a time when the levels of carbon-14 in the atmosphere were higher than normal and higher than now – had the composition of their Achilles tested. In many of those whose formative years coincided with the carbon-14 era, their Achilles still showed a higher concentration of the isotope, decades later. Ah, but what does this mean, you ask? It means that the Achilles, unlike most parts of the body, doesn’t self-replace and self-repair at any appreciable rate unless you actively compel it to do so.

This isn’t a surprise to me, having had this very discussion with Dr. Foot Doctor two summers back. His advice that the Achilles just doesn’t heal at any rapid rate led to my decision to submit to his knife, his sewing skills, and his magic wand for some active repair and active coercion to heal. The major injury certainly responded to the suture in fairly short order, and the coercion bit – the wand-induced perforation to promote blood flow where no blood has flown before, did also, after a long time, bring about healing. But all of this came at the significant cost of the Clot Caper, an adventure I’d like not to repeat, so this time around I’ve not sought to tread that path.

Which leads to the current quandary, whereas the injury-du-jour (or at least the one in discussion here, ignoring the knee from the other side of the world which still irks regularly) resides in the transition zone where the upper Achilles meets the lower calf, that spot that isn’t tendon or muscle but is in fact a little bit of both, adding hope to the healing prospects (being partly muscle) but also adding mystery for the prognosis (being a mix of unknown proportion). With the wisdom of accumulated history (not to mention being well under my medical deductible this year), I really didn’t think shelling out seven hundred bucks for another MRI was needed to diagnose a small tear in the Mystery Zone, especially when during the first few weeks of my forced break, each time some event caused me to thoughtlessly break into a jog or do something slightly stressful, I could almost feel the regression. It wasn’t hard to imagine a small tear, trying to heal itself, that kept getting pulled apart again and again. The trouble, of course, is that my walnut-sized brain took weeks to reach this obvious conclusion, but there’s a lesson here: the value of training logs, even when you’re not training. Here’s where I go all nerd on you… 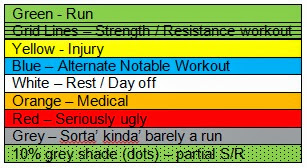 My logs are comprised of a couple of elements. Having been born with the Spreadsheet Gene, that device tracks everything and allows me to bask in OCD glory and tell you at any time my mileage since this adventure began on the twenty-third of March in the year 2005 (that’d be seventeen thousand, five hundred and twenty two…point six). The document component comprises the standard loggy bits – the whims and reflections of each day – plus a bunch more similarly OCD features added over the years during moments of abandon, when the spirit moved me to look at something a slightly different way.

One of those bits which has proven most useful is the section labeled “Running Days” which is nothing more than the digital form of coloring in the calendar with crayon. Why? Well, because who doesn’t like crayons? And also because I can tell at a glance if I’ve been running a lot of days or missing a lot of days, going to the gym too little, and so on. Like many of these added loggings, it started simple before growing additional heads. Run on that day, color it in. But that didn’t really tell the story. Hit the gym for upper body? I’d like to see that, too. Didn’t run, but hiked twelve miles? Doesn’t really seem like that day should be left uncolored, now, does it? Categories proliferated like CIA-supplied weapons in the Middle East to the point where I’m about to hit double digits if I think of one other flavor. (And if you’re wondering what that red “Seriously Ugly” means, think blood clots in the emergency room. Seriously Ugly.)

But all of this time spent on arts & crafts has a purpose. It was pretty clear from glancing at the last month and a half that while it’s now been that long since admitting to injured status (that sunny yellow that so lies about the reality of my mental state), and I’ve thought of myself as having been off the roads that long, it wasn’t till nearly Thanksgiving that I brained up and actually stopped interrupting this interruption long enough to make any progress. I should note that while not marked in the coloring book, another case of spontaneous jogging erupted at Dearest Daughter the Younger’s cross country meet back in early November, further breaking up healing time, thus never making it past about ten days in a stretch throughout last month.

Stubbornness dies hard, but it’s now (nearly, I hope) dead. Tomorrow marks three weeks since last slipping out of Park and into gear before the rubber on the tires was cured. And lo-and-behold, things are actually starting to feel better. I’ve forced myself onto the stationary bike, truly dreadful, but better than nothing and stress-free to the hurting bits. I’ve played cripple on the stairs and other uneven spots to try to avoid re-tears. I’ve gotten over the seriously grumpy stage and risen to only mildly grumpy as my body has adjusted to a lack of endorphin production. And despite knowing that it’ll take longer to recover my fitness and speed the longer I wait this out, I’m at peace to coast just a little while longer so the next time I hit the road, it’ll be for keeps.