Not only did last year vanish in a rapidly moving puff of smoke, but we’ve already burned off thirty percent of this year’s Sixty-Day Challenge, leaving spring, by my definition, a mere forty-two days away. I’ve spent the last couple weeks backing off mileage and intensity to let my disturbingly achy aged knees heal up a bit. But before getting to that break, there was abuse to be done.

I’ve made reference throughout the past year to a rather foolish annual mileage goal, and if I’ve stuck to my guns as closely as I intended, I’ve never identified just what it was. That was an outgrowth of my ‘no trash talk’ policy, or in short, if you don’t make a big deal about something you’re chasing, it doesn’t become a big deal when it doesn’t come about. But the time has come to reveal that way back in January of last year, I set a goal of logging three thousand miles in the calendar year.

To put that in perspective, my buds at Level Renner recently polled their readership on last year’s annual mileage, and my number towered over some but shrunk to irrelevance next to others. In short, the absolute number – and I try to avoid absolute numbers in this column – holds relevance to me and me alone. Comparing it to anyone else is meaningless, not to mention just plain wrong. Comparing it to what I’d previously been able to pack into twelve months – which was about a hundred and fifty lower – was all that mattered to me. And, let’s face it, it was a nice round number.

Last January I was coming off two months of near total rest, working hard not to work hard in hopes of healing up another pesky Achilles flair-up. Deciding to come off that and average two-fifty a month was rather audacious, stupid, or both, but decide I did. I just didn’t tell anyone. There were plenty of things that could stop that effort in its tracks. Like the blizzards that commenced in late January, which limited both that month and the next to two hundred each, which sounds like plenty until you consider that I was immediately a hundred miles behind.

Catching up a hundred miles, when you need to average about eight and a third a day, turned out rather more difficult than I’d expected. It wasn’t till the end of August that I’d truly caught up, at which point I needed to take a week off in to heal up again, thereby putting me right back in the hole. By late in the year, it was, to be completely transparent, getting a bit tedious, but I was too close to making it to even consider letting it go.

As fall marathon season turned to winter and my spreadsheets inexorably counted down to the magic number, a couple interesting opportunities arose that offered a fitting way to close out the quest and open up the following year with a statement, that statement being that while I had no intention of replicating three thousand, I wasn’t dead either. My Squannacook friends lit me up on their “Groton Marathon”, the third rendition of their casual event held the Sunday after Christmas, and about the same time I was reminded of Gary Allen’s tradition of running the Boston Marathon on New Year’s Day – at six AM! – this one in its twelfth year. So… two marathons in six days, the first coinciding with the three-thousand mile mark if I timed things right, the second smacking open the new year in grand style if in fact on very little sleep. Crazy, yes, but sounded grand. 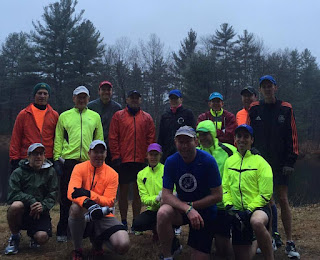 That post-Christmas Sunday dawned wet and raw on the tails of a not-quite departed storm as a pleasingly larger-than-I’d-expected crowd gathered. Though most announced intentions to cover only a portion of the route, a few hardy souls planned to go the distance. From the start this was unlike any other marathon I’d ever run: casual was the word, so casual that had others not started their watches, I wouldn’t have known and wouldn’t have cared how long we were out there. We’d wrap it up a hair under four hours later, by any measure a ‘personal worst’, but that statistic was entirely irrelevant. As our gang slogged out a wide circuit of Groton then south to Ayer and Shirley (yes, I know, stop calling me Shirley!), we took leisurely breaks every four or five miles to snag goodies pre-cached by the Squannies, or to meet club-mates generously stationed for support stops, or just because we felt like it, because it just didn’t matter. 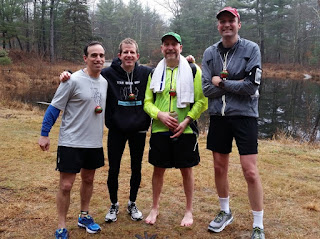 I’d done my homework and identified where I expected we’d be at mile twenty-three-point-five. A GPS within our diminishing gaggle agreed, and somewhere on the east side of Shirley the magic moment arrived as my personal odometer rolled over to three thousand. We made a quick stop to honor the moment, at which point my compatriots demanded a speech. Shocking as it may seem, I delivered the shortest speech of my life, a single line: “Thanks, I couldn’t have done this without a lot of running friends.” Now let’s finish this thing. 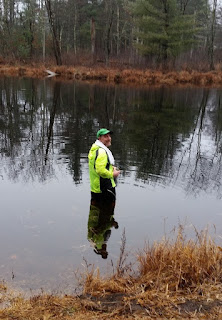 Four hours in the damp left various parts thoroughly chilled (which made organizer Chris’ December pond swim ice bath that much more remarkable), but spreading the distance over that time span resulted in zero hit points, no aftereffects whatsoever, and shed a new perspective on the concept of a marathon. We’d spent a lot of time mid-event (note the choice of word here) discussing the basic question, “Does this count?” With twenty-three marathons under my belt that clearly do count, and several more cases of training the distance which clearly don’t, what was this? Number twenty-four? Or another training run? It’s an interesting question. 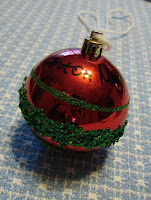 What constitutes a marathon? Surely (that’s the other surely) this wasn’t competitive; nobody sought any level of performance. But thousands of people run marathons every year with no intention of being competitive or seeking any level of performance beyond finishing. No official timing was provided and results weren’t posted, but there are plenty of small races, yes, even marathons, that operate on self-timing and don’t worry about publicizing outcomes. It was small, but I’ve seen 5Ks with fewer runners than we started with. And heck, it was publicly announced, open to all, and we even were given artisan handcrafted finisher medals.

So was it a marathon? The gang sided on yes, and it was hard to argue otherwise. But days later it seemed silly to put it in the permanent race log. After all, I haven’t logged shorter races, even “conventional” events, where I’ve intentionally turned in a casual slog, often to accompany a friend or family member. But on the third hand, Boston 2009 was an intentional casual slog following foot surgery, and it counted. So? There’s really no right answer, but I’m calling it a run, not a race. 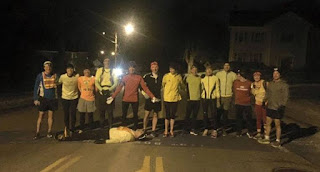 A big factor in that decision was because six days later, I did it again. And the next one wasn’t just any twenty-six-point-two, but the twenty-six-point-two, the Boston Marathon. And if that doesn’t count, well, what does? But this time, the organizer of that event decreed that it most certainly did not. 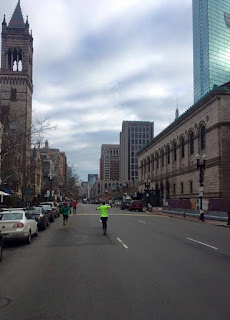 One could quibble that rising at four-thirty on New Year’s Day morning, just a few hours after hitting the sheets post-ball drop and champagne, should count for something in and of itself, but I’ll abide with the judge’s ruling. So numbers twenty-four and twenty-five will have to wait, and I’m happy with the satisfaction of bookending the calendar division with back-to-back marathon runs, knowing that a mere nine hours into the new year, I had one in the books, no matter what we called it.

Six AM is cold, dark, and eerily quiet on the morning after the world celebrates. Running into the sunrise through deserted streets adds a dimension to Boston few have seen. Again casual, though casual this time dropped us on Boylston Street over a half an hour quicker than the last one despite several lengthy pit stops. And yes, this time, in subsequent days I could tell I’d run a marathon. But if we’d decreed that it didn’t count, I couldn’t bring myself to say that Groton did.

I’m OK with that. It doesn’t have to fall into any category to appreciate that despite my complaints, aches, pains, and so on, it’s nice to know you can just go out and run a couple for whatever reason. On with the year. 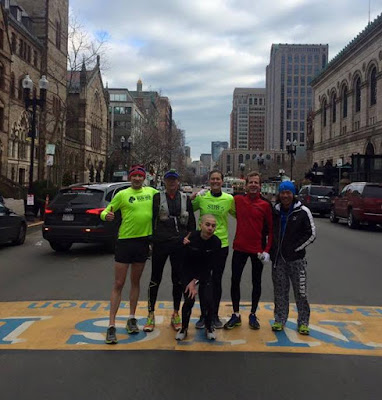 Posted by Gary Cattarin at 5:46 PM No comments: