More Than a Clam Shell


A few weeks ago – no, wait, it’s already been seven weeks, time is flying – I happened to overnight in a small burg on the New York-Pennsylvania border. That morning I hit the roads for a January-chilled seven miles that crossed the border twice (good thing, or I’d never have gotten back to the hotel), and was pleased to see that my pace had finally taken a bump in the right direction, offering a glimmer of hope than an exit from this extended slump spiral of injuries and lousy training might be on the horizon. Owing to the seeming trend-altering nature of the morning, and the geographically notable nature of the course, I’d coined the title of my next posting, “State Change”, but I figured I’d best hold on publishing for a week or two before declaring any sort of victory against this ongoing malaise. It was a wise choice; there was no real change in state.

And so the beat goes on, and with nothing to report but continued ‘meh’, so I haven’t reported of late. It’s always my intent to make this column upbeat, to dig a pearl of positivism from the experience of fighting off aging though Our Beloved Sport, but the reality is that it’s been tough of late. I know that the calendar will catch up with all of us, and I too will slow down, but this latest round hasn’t been that gradual decline. Rather it’s been sudden and difficult to explain, so I haven’t accepted it as the inevitable erosion but instead am still fighting it as a temporary – if extended version of temporary – bump in the road. Or in short, I'm not giving in, and in the meantime, I’m not going to write just to whine.

But it’s Hyannis time, so it’s time to extend my neck from under my rock and tell a story. Better yet, this year it’s a double-decker story, one of my race, a struggle against this ongoing discontent, and a second of a tremendous personal achievement to be celebrated. Not mine, mind you, but I had the honor and joy of having a little nudge in its creation.

So many weeks ago, Boston was still months out, and my only interim test was our annual club expedition to Hyannis to vie for our annual masters’ relay clam shell trophies. Surely by Hyannis, the state would change, and surely I’d then be feeling better about Boston creeping nearer. Stop calling me Shirley. It hasn’t happened. 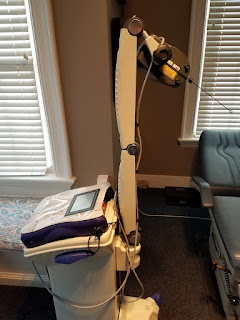 Heading to Hyannis, the best I could say was that that ugly bleeding calf muscle tear from Mill Cities was finally feeling patched up. Early in the healing process, I’d tried a fancy laser treatment offered up by Dr. Foot Doctor. (Remember him? He hasn’t graced these pages for a while.) Said good doctor invested a fair penny in this wonder, a multi-wavelength cold laser (technically a multiwave locked system, or MLS laser, see CE Lasers) which is designed to both reduce pain and stimulate healing. Whether it works through science or simply through fear by its rather imposing targeting device is left for the patient to ponder. While being confident in its capabilities, he’s been struggling to identify a paying patient base, so his offer was simple: try it out, and if it works, write it up. And so I tried. And the first time, it seemed to have a positive impact, reducing some of the pain and – I liked to think – possibly speeding some healing. Subsequent treatments seemed to have diminishing effects, so after a course of four or five sessions, I had a hard time offering a solid endorsement, but I wouldn’t call it a failure, either. I’d bet it may have initiated speedier healing, and it may be effective for some people, and I will happily provide you contact information if you’d like to give it a shot. Still, full healing, for me at least, still took a solid eight weeks.

So, Hyannis came about with a whole calf, but still a knockin’ knee, a hurtin’ heel, and overall frightful fitness. But it’s a low pressure event, so it’s a good opportunity to test the pipes.

Let’s cut right to the final scene, where unlike at the Oscars, the correct winner was announced, and again it was us. Tom Brady has only five championships in his seven tries. We’ve won all seven of ours. Granted, Tom Brady gets the crap kicked out of him by worthy opponents, and we, well, we’ve faced some opponents, a couple of times even worthy ones, but this year, we placed first in our division of precisely one team. A somewhat hollow victory, but tempered by finishing in the top ten percent of all teams in all divisions, and after all, a clam shell’s a clam shell. Just assembling the team and showing up on the starting line is, of course, part of the battle, and no other collection of old farts was willing and able to do that, so we’ll take it. 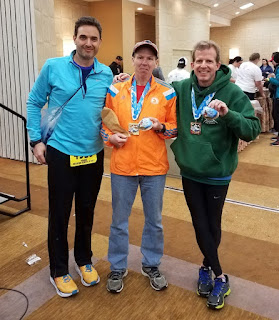 Not that the victory wasn’t without some drama, including the ‘just showing up on the starting line’ bit. Our leadoff man crossed his signals on the race starting time, hit traffic, couldn’t find parking, and arrived a mere twenty minutes before the gun, while I was swapping bibs in expectation of having to take his first leg. Restored to my usual third leg by his dramatic appearance, I couldn’t help but notice the grey-haired fast-looking dude – decked out in a USATF Grand Prix race shirt no less – waiting alongside me at the exchange zone. Anticipating a Personal Worst even before factoring in Hyannis’ legendary wind, the guy looked like a threat, and after delivering on my promise of that Personal Worst (though admittedly still faster than I’d expected), I put the Fear of God into our anchorman, warning him of the danger as I handed off. When the divisional team count was revealed, he’d later curse me, but another respectable team time capped by that clam shell forgives all sins. The dynasty lives on.

I’ve made it a habit of running the back half of the Hyannis course as an easy warm-down after my leg, joining up with our lead-off man who’d typically be waiting at the exchange zone (the Hyannis course being two iterations of a half-marathon loop, legs one and three are the same). Sadly, our lead-off man, after his dramatic late arrival, had to make a dramatic early departure as well due to family obligations, missing both his Moment of Zen clam shell award (thus only three of us in the team photo), and worse, his traditional back-nine (really, back-six, but that doesn’t sound as good) casual jaunt with yours truly. That left me to either abandon my add-on miles or go it alone. After a few minutes of catching my breath, chatting up other racers, and finding no interested parties, I figured I’d just slog it out on my own.

Without any deeper thought than figuring I’d better go before the warm glow of blood flow began to fade, I jumped back onto the course, randomly happening alongside a blue-bibbed, a.k.a. full marathon, young lady fighting the mighty headwind of Craigsville Beach. Not wanting to get in her space, but figuring I could dish up a service, I offered up a windbreak: tuck in if you’d like till we get back inland, away from this forlorn spot, or tell me to get lost and I won’t bother you. Not getting the latter response, I tried to provide whatever shelter my miniscule form could carve from the gale, while clumsily doing my best to not be a nuisance.

What became clear was that this was her first marathon, and she was hammering the miles with admirable consistency as she delved deeper into the twenties, the runner’s equivalent of the Death Zone on Everest, where until you’ve raced it several times, you just don’t know what to expect nor how easily it can knock you out. It was also clear that she was in the “I don’t want to know” zone, not checking her watch (at least not when I was looking), not living by the numbers, just running it, and to my view, running it well. And it was crystal clear that if she didn’t fall apart, she’d destroy her Boston Qualifying time in Marathon Number One, a feat the significance of which her non-running friends would never understand, and one for which her running friends would good-naturedly hate her.

What wasn’t clear was by how much. I’d clicked off my watch at the end of my relay leg, but my recollection of when the gun had gone off – in real time – hinted that this lady was going sub-three-ten. And while I hadn’t paid close attention to who’d passed by in the ten minutes between the end of my relay leg and when I’d jumped back on the course, I had a sneaking suspicion that she was, in fact, on track to win this thing.

What was a little fuzzy was whether I was a help or a hindrance. My offers to get out of her hair were turned down, but hey, that could have just been her being polite even in her time of agony. So I tried to leave ten feet or so of space, but hold a steady pace for her to key off, and provide bits of encouragement and marathoner wisdom, notably responding to her discomfort in the high miles with the simple adage that yeah, it’s supposed to suck right about now, so you’re doing fine. 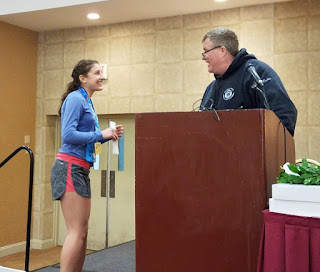 And she was doing fine. She held it together for about twenty-five and a half before the wall closed in. That last three-quarters of a mile were a real fight, and two women passed – who would turn out to finish one-two – but my accidental acquaintance still motored in to a third place finish, clipping that three-ten mark by a minute-plus, crushing her Boston Qualifier, and picking up a prize check that in one fell swoop exceeded my lifetime cash winnings from this sport. In her first marathon. Damned impressive. Congratulations, Arianna! 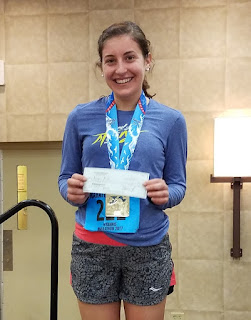 I tried to stay low key and out of the way post-race other than offering up my congratulations, knowing that despite her previous acceptance of my coaching, she might well have wished to be left alone. But to my utmost relief, she was graciously thankful, which made me a happy old fart, knowing that perhaps I’d contributed one tenth of one percent (and not an iota more) to her success.

And that’s one of the beauties of this sport. It’s not just about our own struggles, victories, and even defeats, but it’s about our community, the support we get, the support we give, and the joys of being on both ends. I came home from Hyannis with a clam shell, but I also came home with a happy memory of being able to provide some of the fabric that helps us all to our goals.