Five forty-three in the morning isn’t a happy time for many people, and certainly not for a distinctively non-morning person like myself. Or perhaps I should clarify; I’m not so much anti-morning as I am anti-stop-sleeping. Once I am up and functioning, mornings can be the most glorious time; it’s just getting to the glory that’s highly objectionable. So it was that my five forty-three departure from the budget motel next to the interstate was in no way glorious, yet there I was, chugging out in thirty-degree darkness, heading away from that interstate as fast as my stiff and sluggish legs would take me, which at that hour wasn’t very fast. 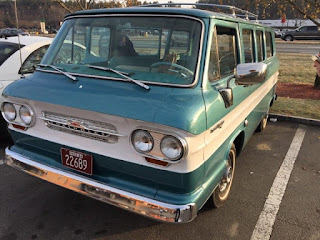 The fact that I found the motivation to drag my bones from a comfortable bed in order to clock five miles before grabbing the train for a day of meetings in New York is indicative that things have been turning up of late. Not up so much as to declare myself out of the woods; I’m not certain I’ll ever do that (much to the amusement, or perhaps dismay, of my running buds). Incessant worries of re-impending doom will never vanish, nor will twinges in the knee (which have in fact intensified in the last few days), but things are up enough that racing has risen to something greater than futile, and that I’m even on a mini-streak of sorts. While I’ve got nothing on my friend around the corner who has topped four years straight without missing a day, my nearly three months of daily forays have done their dual job of seeding compounded motivation while edging me out of my training slump. At least on some days, it’s starting to feel fun again. 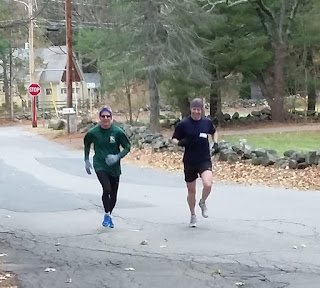 Popping in three races within eleven days, or at least three events labelled as races, was a hint that this is indeed a breakout from the past year of agonizing. I say events labelled as races since I truly raced only one, I mostly raced another, and the third was more of a hard tempo (or a fast training run for you non-runspeak types). Nevertheless, three times on the race course, three times in the results listings, and three times satisfied with the outcome. It’s all good. Even if that knee still worries me.

The hard tempo, actually the middle outing of this trio, was a Home Course Advantage pounding of my local club’s Tough Ten Miler course, Thanksgiving Edition (or technically the Sunday after). I’ve long ago given up caring that it’s really only nine-point-eight-five, not that I’m counting or anything, because the hills make it run like eleven. And being certified OCD, I convert my results before spitting them through the age-grading tables anyway. 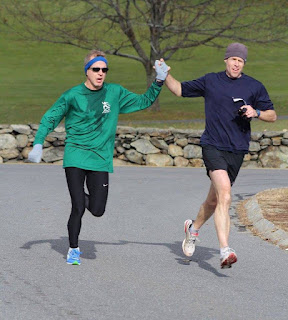 On that chilly but fine morning (fine at least until we finished, at which point the windy sleet hit, chilling all to their bones), I joined with former Greater Boston teammate Kris in a mutual non-aggression pact. We agreed we’d run it together, we’d push it together, we’d finish together in a bi-partisan spirit of cooperation (he being distinctly right leaning, I the opposite) that our country could use more of. We picked a pace, we hit the pace, we dropped a few of our friends along the way, and we turned in a time that, while quite a ways off my overall best on the course, actually clocked in as a best on the all-hallowed and holy age-grading scale. Who saw that one coming? Of course, somewhere around mile seven, I commented that if we really were racing, I wasn’t sure I’d be going all that much faster.

But while I hadn’t expected a best, I did expect a solid run, as I’d raced with Kris just four days prior on the real turkey day. Or at least unofficially; as when he’d shown up at Stow Gobbler they’d sold out, so he ran sans-bib. Legal or not, he dragged me to my best outing in a year and a half – so when he suggested coming down for the ten miler afterwards, it was roll-out-the-red-carpet time.

Last year I hobbled into Stow hoping merely to stumble in within a minute per mile off the previous year. Not a minute overall, mind you, a minute per mile; it was that bad. I made it, but that wasn’t saying much. This time, Baby Steps, keep it reasonable, I targeted my recent decent outing at John Tanner’s race, aiming for just a hair better. Meeting Kris on the line, his stated goal pace was clearly a bit hot for my tastes, and I wished him well. But a mile in, I found myself hanging a mere ten yards off his flank. Heck, either he’s dogging it, or I’m clicking; either way, milk it. 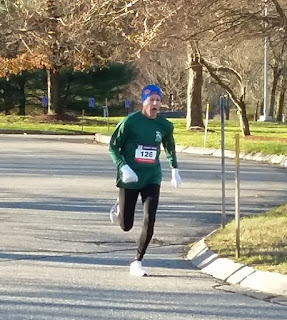 Two miles in and I wasn’t catching him, but I wasn’t losing him, either. I’m pretty good at on-course math, and the numbers seemed pretty clear that I’d top the Tanner outing – on a known accurate course, to boot – but then things got a little gray. Maybe it was the blinding morning sun, but for whatever reason I was momentarily blinded in the calculations department. I had an inkling that an even minute boundary was within grasp, but I couldn’t get my head around how close it might be.

In cases like that, there’s really only one thing to do. Hurt yourself.

Never mind the age graded scale (which spit out a satisfying number, for the record). I’m mildly proud and very amused that the photos from the end of this one went off the charts on the Death Warmed Over scale. It's kind of a meter that says, yes, you gave it all you've got. And that even minute boundary? Not just nailed, but let’s just say it wasn’t close; I didn’t need to hurt myself quite so much to gain that, but I’m glad I did. And as a bonus, Kris, ten yards ahead to the finish, had no bib and so honorably veered off at the last moment. Having already been a fantastic pacer, he turned my tiny little Stow masters’ medal from artificial bronze to artificial silver.

Question: How do you top two solid outings like that? Answer: With style.

A week later it was Mill Cities time, when I shed my Highland City and Central Mass jerseys and turn into a Squannacook River Runner for a day. Not being tightly ingrained in this group (entirely my fault says Mr. I-Can’t-Remember-Names-For-Nuthin’, since they are always of famous hospitality), I make no demands on their team organization. Put me where you need me, I’ll run.

My slight dismay over being swapped off one team, where I was to have run the long nine-point-five mile leg four – my favorite – onto a different team, where I was tagged to run the opener, five and two-thirds miles of rolling terrain in the early morning coldness, was immediately dispelled when I arrived at the pre-dawn team rally and spotted our ride for the day.

And oh, what a ride.

There, idling in the parking lot (since, it would turn out, we needed to keep it running all the time) was a beautifully restored 1965 Chevy Greenbrier van (the first photo, up top...why, you ask?...because Facebook grabs the first picture in the post as a preview, so yes, I'm kowtowing a bit). Before we’d left the parking lot, before we’d seen another team, heck, before we knew if there were any other teams, we knew we had the coolest ride on the block, bar none. Indeed, at one point that day we’d find ourselves stuck in traffic next to a friend in his bright red early-eighties Pontiac convertible – with the top down – and, well, it was no contest. He was cool. We were awesome. 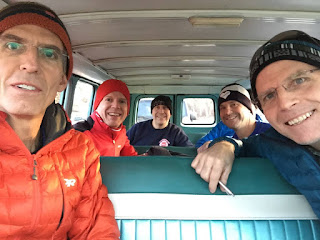 This ride wasn’t without its downside. Seatbelts weren’t a thing back then, nor of course airbags, nor, I’m sure, plenty of other nice comfy protective things in the event of Sudden Ugliness. It didn’t have what you’d call a tight suspension; at times we wallowed about like a pregnant whale trying to damage her calf through excessive drinking. And then I noticed the “Corvair Club” sticker on the back and suddenly realized why the styling was so familiar: this thing was indeed built on the same chassis that made Ralph Nader expect to roll over in his grave. And think if a low-to-the-ground Corvair could roll, what might a high-off-the-ground Greenbrier van do? When we’re going around a leftish turn, downhill, braking hard to turn the hard right into the school where the next exchange zone awaited? Yeah, I had a few tense moments.

But it was oh, so cool. (And later research, by the way, explained that the 1965 model had a redesigned chassis that was not susceptible to the rolls that made both the Corvair and Nader famous. An interesting read worth three minutes.) 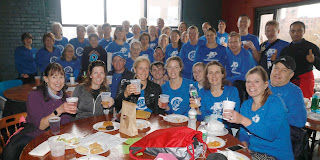 The race? Oh yeah, we raced. It was cold. They altered the course just a little, adding another hill (why, thank you!). And I couldn’t find my man for a couple of seconds at the far end, leading to an exasperated shout that I’d be rightly abused for throughout the remainder of the day. And like the Tough Ten Miler the week prior, nowhere close to my all-time best on that leg (even considering the course changes), but age-graded, solid. And most of all, a lot of fun with running friends.

A few months ago, I wouldn’t even step on a race course. Now, three in eleven days. None record-breaking. All smile-inducing.

Meanwhile, back to that morning a week ago outside of New Haven, Connecticut... By the end of that slog I’d snuck up on a few early dog walkers, spotted two fellow early runners, run alongside a commuter jet taxing for takeoff (yes, an airport was involved), had a stint on a path alongside the sea, and yes, started to see the earlies tinges of dawn. All before six thirty. When you’ve done that much by that time, the rest of the day is gravy. It was glorious.

Disappointment can bring you spiraling down, but motivation can build on itself. It takes a lot of effort to get out in less than ideal circumstances, but doing so brings rewards, both immediate and long-term, and those rewards feed back to get you out for more, or, in simple speak, the more you run, the better you run, and the more you’re likely to get out to run some more. Even before six in the morning. But don’t let that news travel too far. People might think I’m up to something, or – gasp! – willing to get up early..